The Snake-neck Turtle (or Side neck Turtle as it is sometimes referred to) is native to Australia's eastern coast from Victoria in the south to Rockhampton in the north. It's identified by it's grey/black body, black carapace (brown in younger specimens) and in older specimens white plastron with black seams joining the scutes. It has an especially long neck that must be tucked in sideways for protection. 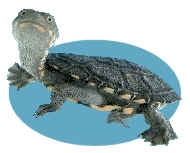 Snake-neck Turtles grow to approximately 20 to 25cm. Both males and females grow to the same size and are identical to each other in every way, making sexing of these guys extremely difficult.

Snake-neck Turtles are a very aquatic species so require a good sized swimming area. They're a very placid species and keeping more than one in a tank is never a problem (just ensure that they are of similar size to one another to avoid accidents during feeding as Snake-necks feed with gusto and might inflict unintentional damage to one another!!) Snake-neck Turtles are easy to keep but care should be taken when hand feeding as they are very quick!

Snake-neck Turtles are particularly susceptible to Ammonia poisoning, so large weekly water changes are essential to avoid them getting ill.

The Snake-neck Turtle is a very personable and hardy Turtle, and is ideal for those who want to keep something different.